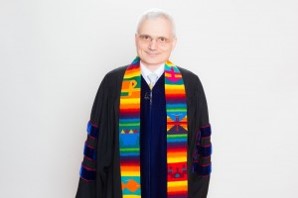 Pastor Andrew is originally from the Czech Republic. He studied theology in Prague and Edinburgh, and received his Th.D. (Doctor of Theology) from Charles University in Prague for the study of Ancient Near East history and religion. He served two churches in the Czech Republic, the last one in Prague. In 1999–2000, Pastor Andrew was a mission partner in residence and a mission and theology interpreter with the Presbyterian denominational headquarters in Louisville, and Louisville Theological Seminary. In the summer of 2002, he accepted a call from West Presbyterian Church in Binghamton, NY. From Advent 2009 he has served Rutgers Presbyterian Church, having been attracted by its inclusive spirit. Pastor Andrew, having grown up in church under a totalitarian regime, considers the quest for truth, justice, and peace to be an essential part of church’s calling. At the same time, he knows that curiosity, playfulness, and creativity are integral parts of a living faith.

Pastor Andrew writes a weekly blog called A word of tree, a whisper of stone.